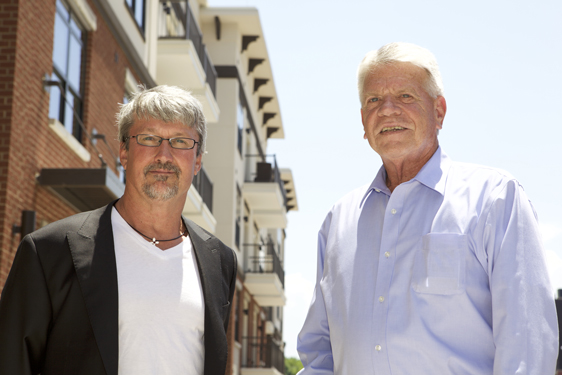 Buzz Goss, President, Marble Alley Development LLC announced today that Dale E. Smith, former CEO of the Public Building Authority of Knoxville/Knox County (PBA), has joined the firm as Partner. Smith and Goss will partner on new projects such as the second phase of Marble Alley, the Caledonia Flats at Marble Alley, and several others which are in the early planning stages.

Goss and Smith intend to focus their efforts on urban mixed-use and multi-family projects, primarily in Knoxville. They also will offer their expertise to land owners and investors on a fee-development basis.

Goss, said, “Having known Dale for 15 years, I have grown to appreciate his professionalism and integrity; his skill sets and experience are a perfect fit.”

“I’m honored that Buzz invited me to be his partner. He set a new standard of excellence in downtown residential development with the Marble Alley Lofts project, and I look forward to working with him on similar projects,” said Smith.

Goss, is an acclaimed architect known for his restoration of historic buildings throughout the southeast. A graduate of The University of Tennessee School of Architecture, He has been a design architect and a project manager architect on such diverse projects as the historic Burwell Building in Knoxville, TN (home of the historic and world renowned Tennessee Theater), The Exchange Lofts on Church Street in downtown Nashville, TN and the Jackson Ateliers in Downtown Knoxville, TN. Buzz has over thirty years of experience in the fields of architecture, development, and property management.

An accomplished sailor and certified Coast Guard captain, Buzz enjoys ocean sailing, power boating on Fort Loudon Lake, and international travel. In addition, he enjoys using his hands to renovate some of his properties and bringing to life his unique vision for living spaces.

Prior to joining PBA, Smith managed, developed and ultimately divested a 60,000 acre real estate portfolio in South Florida owned by the John D. & Catherine T. MacArthur Foundation from 1993 to 1999. He served as Executive Director of the Palm Beach County (FL) Economic Council from 1988 to 1993 and as Manager, Public Relations & Advertising at Pratt & Whitney’s Government and Space Propulsion Division from 1985 to 1988. Smith served eleven years active duty and eleven years reserve duty in the U. S. Navy, retiring in 1996 as a Captain (O-6). He graduated from the University of Wisconsin – Madison, which he attended on a Navy ROTC scholarship.