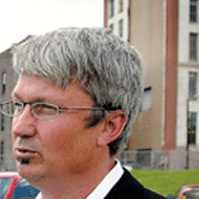 Buzz Goss, President of Marble Alley Development, is also an acclaimed architect known for his restoration of historic buildings throughout the southeast. A graduate of The University of Tennessee School of Architecture, He has been a design architect and a project manager architect on such diverse projects as the historic Burwell Building in Knoxville, TN (home of the historic and world renowned Tennessee Theater), The Church Street building in Nashville, TN and the Jackson Ateliers in Downtown Knoxville, TN. Buzz has over thirty years of experience in the fields of architecture, development, and property management.

An accomplished sailor and certified Coast Guard captain, Buzz enjoys ocean sailing, power boating on Fort Loudon Lake, and international travel. In addition, he enjoys renovating properties he owns with his own two hands and bringing to life his unique vision for living spaces. 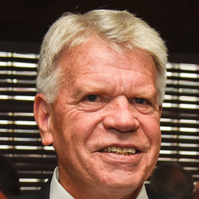 In his most recent position as CEO of the Public Building Authority of Knoxville and Knox County (TN), he completed over $500 million of construction projects, including office buildings, health care facilities, justice facilities and jails, a convention center and transit center. In addition, he managed over 3 million square feet of government buildings.

In a prior position at the John D. & Catherine T. MacArthur Foundation, Smith took over management of a 60,000-acre real estate portfolio in Florida. During his tenure there, he partnered on development projects including the 2000-acre Abacoa mixed use development in Jupiter, Florida, the 300 unit Mira Flores Apartment complex in Palm Beach Gardens, Florida, as well as selling land to developers for a wide range of other projects. In 1999, he completed the divestiture of the portfolio by selling 18,000 acres in a single closing for $224 million.

Before joining the MacArthur Foundation, Smith served as Executive Director of the Economic Council of Palm Beach County (FL) for five years. The Council was a very active advocate for the business community at the state and local levels, and was an invitation only membership of 125 CEOs of the County’s largest employers.

Smith also has over eight years experience in international and national media, public relations and marketing experience. This includes six years as a Public Affairs Officer in the U. S. Navy and approximately three years as the Manager of Public Relations and Advertising for United Technologies Pratt & Whitney’s Military and Space Propulsion Division in West Palm Beach, Florida. His experiences in Navy public affairs involved work at two of the largest headquarters staffs in the military, and included events such as escorting the media pools during the U. S. invasion of Grenada, as well as handling news media matters for numerous aircraft accidents, ship collisions and the like. 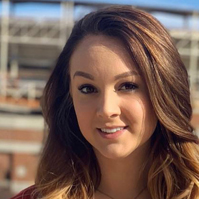 Transplanted to Knoxville as a small child, Selina graduated from the University of Tennessee with a BA in Finance. She enjoys math and anything involving organization. Prior to holding her current position, Selina worked in daycare centers due to her nature to assume “the mom position,” which is apparent by her six animals and large friend group. 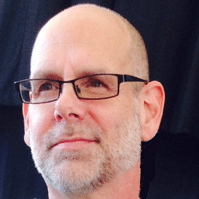 Having worked in the marketing management role for such diverse companies as HGTV, Cyberflix, and IdleAire, Scott Scheinbaum is no stranger to effectively delivering a message no matter what the medium. His extensive skill set includes online marketing, SEO (search engine optimization), website creation, copywriting, Social Media management and creation, video production (both for online and offline purposes), and print media.

Scott is an alumnus of The University of Tennessee where he majored in Music Composition and minored in Computer Science. In his spare time, Scott enjoys writing and listening to music, writing screenplays, and anything related to aviation. Scott is a resident of Downtown Knoxville and is active in many charitable and civic causes. 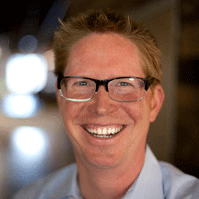 He has served as CEO of Modern Sprocket, a venture catalyst firm helping to launch new technology companies. Hunt also worked as the former senior director of digital product development at EW Scripps Company and former vice president of user experience and product development at VarsityBooks.com. Over the course of his career, Hunt, a graduate of the University of Tennessee, has consulted with a variety of corporations and startups. With AOL, he worked on global corporate branding projects and the creation of the first Internet-based AOL Small Business portal. He also completed a competitive benchmarking study setting CapitalOne.com against its top 6 competitors, and he worked with Fannie Mae to design a new web-based application that combined the functionality of more than a dozen legacy apps. Hunt’s experience also includes working with IBM, the Peace Corps, Philips, Software AG and Storage USA, as well as numerous government agencies, including U.S. Health and Human Services and the Department of Commerce. 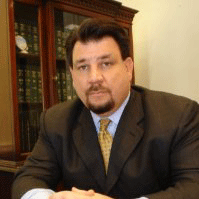 A graduate of the University of Tennessee School of Law, Keith Stewart is legal counsel for Marble Alley Development. Keith has been instrumental in navigating the complex commercial legal hurdles needed for our projects both large and small. Keith is a former Board of Governors member of Tennessee Trial Lawyers Association (TTLA), now the Tennessee Association for Justice (TAJ); Co-chair of the Law Office Technology Committee of the Knoxville Bar Association; Managing Associate for Stewart, Cole, Dupree & Roper P, and chair of the Law Office Technology Committee responsible for overseeing and planning the Law Tech Expo each April in Knoxville, Tennessee.

In his spare time Keith enjoys playing basketball twice a week with his colleagues, golf (when its warm enough), and hiking in the Great Smoky Mountain National Park. Keith is an avid runner, having completed six half marathons in the past 16 mo