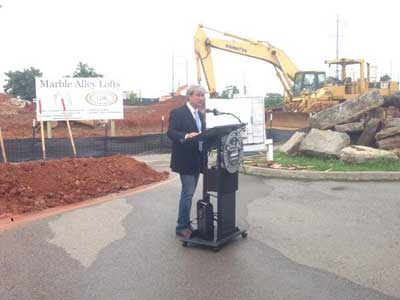 KNOXVILLE (WATE) – A groundbreaking was held Wednesday for a new multi-million dollar residential development on the Marble Alley property in downtown Knoxville.

It’s been a long time coming for Goss who came up with the idea back in 2008.

“I always knew it would, I just didn’t know when,” he said.

The property was acquired by the Knox County in the 90s and proposals have ranged from everything from a justice center to a stadium to a planetarium.

“This is much better than a jail,” Mayor Burchett noted in his opening statements at Wednesday’s groundbreaking.

The three-to-five story residential facility is a $15-20 million planned investment. It will include 238 units, a 350 space parking garage, a courtyard and resort-style pool, and fitness and lounge facilities. Other phases of the development ultimately call for a mixed-use space that will include commercial retailers.

The promise of more than 200 people coming to the neighborhood is good news for local businesses.

“We are so so excited to see anything moving to anywhere downtown but certainly in our backyard,” said Jessica Wilkerson, an interior decorator at O.P. Jenkins furniture store.

The hope is the development will connect Old City with Gay Street and the heart of downtown. The City of Knoxville is investing $1.5 million in streetscape improvements to the streets surrounding the project.

“Your downtown speaks a lot about you as a city, downtown is good investment in terms of upgrades to our streets, our lightening and our buildings,” said city councilman Dan Brown.

Businesses like O.P. Jenkins hope the improvements and the new residents will increase foot traffic in the area.

“The more people we can get living here, the more foot traffic were going to get to the business were going to have and were just going to see more and more progress,” said Wilkerson.

The lofts will be rental units and are expected to open in early 2016.